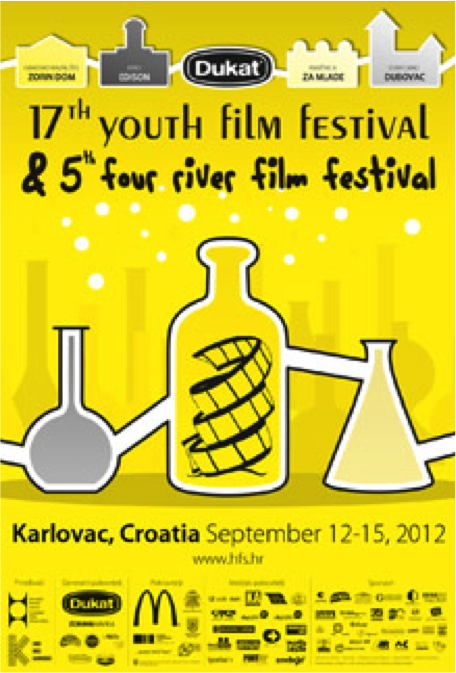 From 12th to 15th September 2012, the 17th Youth Film Festival and the 5th Four River Festival will become the most important place for Croatian as well as international high school film. Thanks to the organization of the Croatian Film Association and the Cinema Club Karlovac, the city of Karlovac will again “become yellow” and about 160 high school kids from all over the world will give their dose of the colour yellow and good films. The Festivals will take place in the only city in the world, which lies on four rivers – Karlovac, Croatia.

Marija Ratković, the Coordinator of the YFF and FRFF, said: “The film experts are aware of the importance of this event and its influence on young, creative minds. Sometimes, we forget that all of us have to start somewhere and that the beginning requires the most effort, the purest ideas and undisturbed creativity”. The enthusiasm and the mutual connectedness of these young people encouraging creativity, personal growth and expert skills are the foundations of this festival. Therefore it is no surprise that there are more films each year, from more different countries around the world.
The Festival gives the possibility to win different Awards, such as The Best Animated Film, The Best Documentary, The Best live Action Film for both category, National and International ones and, last but not least, The Grand Prix for the best film. It will be a very interesting and mixed group of films.

ÉCU is glad to be part of this year’s Youth Film Festival and the Four River Festival by hosting a special screening of three ÉCU films from our 2012 festival: “Callum”, by Michael van der Put, “The Time of the Plums” by Sezen Cayhan and “” by Philipp Comarella and Simon Griesser. Also, even though we cannot attend the festival on person, our president Scott Hillier, will make a video presentation to the young and talented filmmakers.