Inside Track for Independent Filmmakers

Want to know the insights of film financiers and distributors? Interested in getting tips from a professional in the film industry about how to distribute your film? This is your chance! ÉCU is proud to announce “Inside Track for Independent Filmmakers”, a workshop given by Adam Leipzig. Get your ticket HERE

On Saturday morning we will begin with a great workshop given by Adam Leipzig, CEO of Entertainment Media Partners, publisher and managing editor of CulturalWeekly.com and the author of the acclaimed new book Inside Track for Independent Filmmakers: Get Your Movie Made, Get Your Movie Seen and Turn the Tables on Hollywood.

Nowadays, making a film isn’t difficult. However, making a good film and having it seen is a whole different story. More than 90% of films that get made never get seen. How can you flip the odds in your favor? In one fast-paced, entertaining hour, media expert and film executive Adam Leipzig will reveal the inner workings of what goes on through the heads of film financiers and distributors. In this workshop, Adam Leipzig will give you practical tools that you can immediately use to shape your project into a movie that will become made and seen.

In his time in the film industry, Adam Leipzig has overseen more than 25 films as a producer, studio executive, and distributor, including “March of the Penguins”, “Dead Poets Society”, “Honey, I Shrunk the Kids”, and has worked with legendary directors Robert Altman, Peter Yates and Peter Weir. He has served as the President of National Geographic Films and as Senior Vice President at Walt Disney Pictures.

Get your ticket to “Inside Track for Independent Filmmakers” HERE

Adam Leipzig about “The Current State Of Independent Film”

First-time Filmmakers and the Microbudget 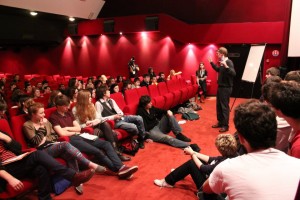 First time filmmakers hear that a successful film can be made on a micro budget, but how does this really happen? What systems are used? How does a filmmaker prioritize in order to make sticking to a micro budget possible? Writer/Director Alan Arrivée will present his own conclusions on the subject, based on his personal experience as filmmaker and his mentoring of first time filmmakers as professor of cinema production. First time and experienced filmmakers welcome.

Alan Arrivée is a filmmaker and writer, currently an Assistant Professor of Theatre & Cinema at The University of Mississippi. He has had experience as Director of Theatre & Cinema at Missouri Western State University. Arrivée is best known for his work on the short film, Silent Radio for which he was the writer, director and producer in 2007. Alan is also a professional actor and a member of the Screen Actors Guild and Actors Equity, as well as the University Film & Video Association and the Austin Film Society.

Get the tickets HERE

So you’ve got a great idea for an independent film. You’ve written your script, you’re a pro with a camera – now don’t forget, you’ll have to edit it too! Not sure how to start? Intimidated by the process? Let Antoine Vareille ease your phobia of the editing room in his workshop, “Editing and Structure!” Get your tickets here!

“Aaand that’s a wrap!” While for the production crew, this celebratory expression signals the end of the shoot and the time to congratulate themselves on a job well done, it has a completely different meaning for another team of dedicated artists: the few, the proud, the editors. If you count yourself among this group, or if you think you’d like to, don’t miss Antoine Vareille’s workshop “Editing and Structure,” in which he’ll discuss the general process of post-production editing, start to finish. From special effects, to color correction, to sound design, if you have a film read to edit now or are just starting out in the editing room, in this workshop you will learn the essentials of successfully editing your masterpiece.

Antoine Vareille is an editor of feature films and television. He was editor for the film “Fatal” and has also worked as an editor for the films “Sea, Sex and No Sun”, “Faces in the Crowd”, “Lucky Luke”, “Hitman” and “Big Nothing” . He is currently working on the TV series Kitchen Kabul. He also worked on the television documentary series Intimate Portrait with Peggy Fleming and Cindy Crawford.

But your tickets here: HERE