The ÉCU Team attended Cannes Film Festival for its 68th edition of the festival from May 17th until 24th. Read below our experiences, check out some photos and videos…

It feels just like the end of the 10th edition of the ÉCU Film Festival all over again! It is such a bittersweet feeling for this week to end. Although it was a lot of work, I’m going to miss the amazing atmosphere of Cannes.

Here are the ÉCU team highlights and favourite moments from this year’s Cannes Film Festival:

The sun, the blue sky and the wind make it look like we are in a movie on the French Riviera! On our 6th day in Cannes, our team has been all over the place promoting our Festival. On the Croisette and on the most fashionable streets of the city, part of our team were taking pictures with the coolest guys in town: filmmakers, actors, Cannois, tourists, cinephiles… Take a look at the video below to discover the Festival’s faces!

But, of course, the place to be during these 2 weeks is the Palais! Things inside are still exciting, and we have not missed the opportunity to meet new indie creatives and look for submissions. The Short Corner Happy Hour is still our favorite moment of the day, and between a ‘cheers’ and a ‘santé’, directors from all over the world have talked to us about their interesting new projects: we really hope to watch them at the 11th edition of ÉCU. Have we already told you that the submissions are open?

The work-day has ended in classic Cannes style: all eyes are on the red carpet, where Marion Cotillard and her mates were attending the premiere of ‘The Little Prince’. Shiny dresses, flashes, beautiful faces and smiles.. and hundred of people ready to catch the moment with their cameras and phones. On our Instagram you will be able to re-live the Red Carpet (with the perfect filter too, of course)

The Festival is going to end in a couple of days, our great experience here as well. We are surrounded by predictions and discussions about the future Palme D’Or winners, but just in case you missed it, here is the highlight of this edition of Cannes: Lucky from the portuguese film ‘Arabian Nights’ has won the Palm Dog today! Congrats to him, and good luck to all the films in the Official Selection!

Day 5 arrived with a cold morning and a little rain, but it didn’t keep ÉCU’s team from going out on the streets promoting the festival and the channel! Today we even got the help of some celebrities – check out our photo album to discover who and how.

The streets were full and active as always, with different events happening all over La Croisette. From street dancing to questionable wardrobe choices, we’ve seen it all! I had the chance to see a live filming of an episode of Le Tchoïsse. They sure know how to keep the good mood!

As always, filmmakers and film lovers were eager to learn more about our festival and we got some young independent filmmakers to submit their films to the next edition. It’s always such an amazing atmosphere at the Short Film Corner.

Oh day 5… It makes me so sad to think Cannes is almost over. 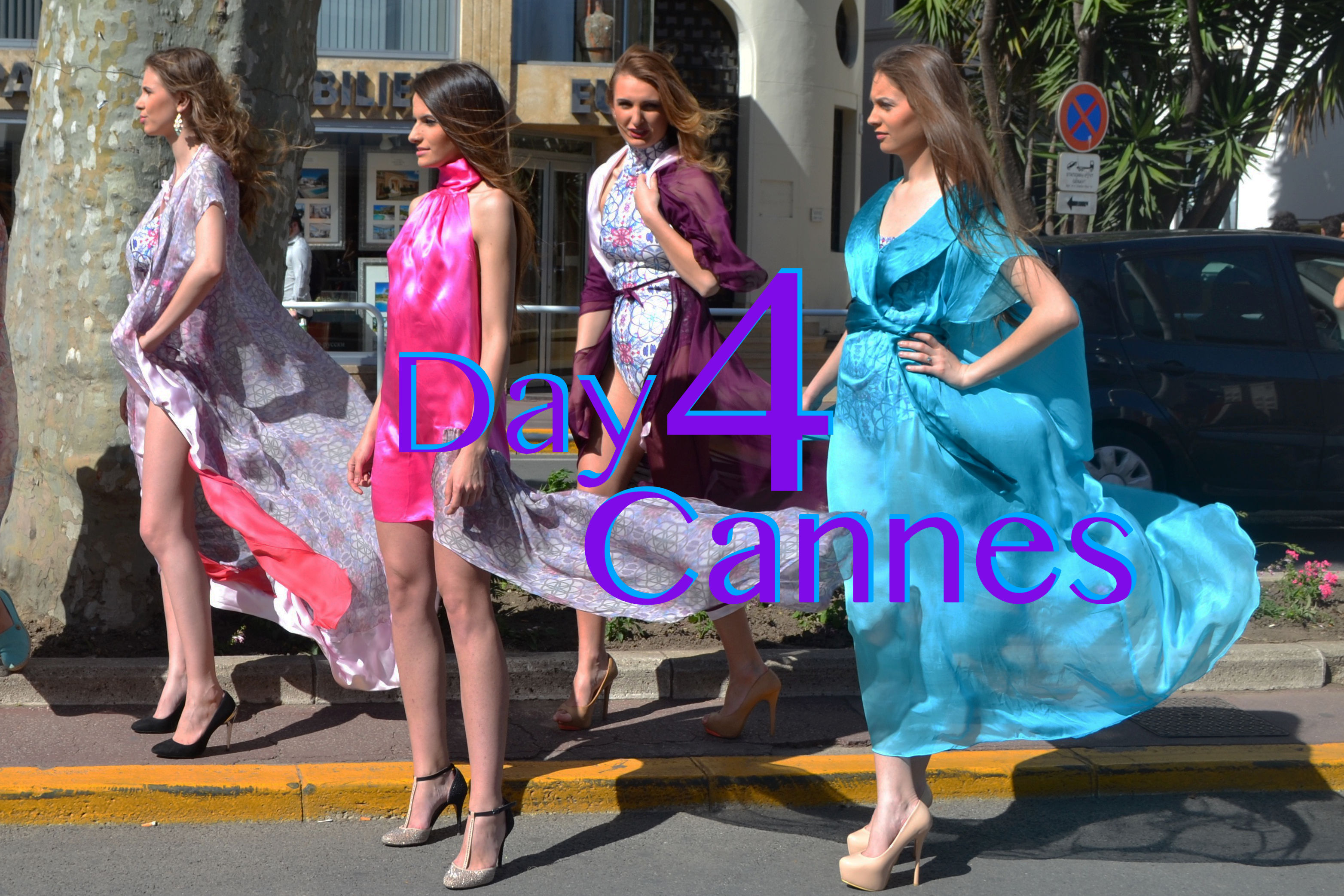 Can’t believe it’s day 4 already – we’re more than half way done with our sunny, south of France adventure. The weather’s been absolutely gorgeous and the vibe here is way groovy!

One half of us has been busy filming “interesting things” for our video highlighting the differences between ÉCU and Cannes, so look out for that addition to our blog soon. We were working so hard; publicising the festival and peppering the area with an insane amount of stickers, that some people even offered us a free lunch! But it wasn’t just us – an organisation has been tirelessly working to provide 5000 free meals to festival goers today. What’s the catch? Nothing really – they prepare meals made from unbought and sometimes “ugly” fruits and vegetables that taste absolutely great; ÉCU certified.

It just goes to show that films are not the only thing grabbing people’s attention here in Cannes. Of course there’s no denying that cinema is the main reason why everyone gets together each year, but it is also a great platform for people to soak in the atmosphere, and meet each other while spreading their passions; whatever those may be. We even ran into a group of street dancers performing for free along the beach. It really is great to see that you don’t need a £1000 dollar dress and heels to enjoy the festivities ;).

Not that we didn’t see £1000 dollar dresses, because we did. Models from Fashion TV momentarily took over and treated us to an impromptu road-side fashion show. Talk about VIP seating!

Some of the other interns have been hitting up the networking scene at the Short Film Corner again. Interviewing filmmakers, actors and producers – while encouraging them to submit their work to our festival of course – is exciting work indeed. It’s great to know that we’re in a place where the next generation of master filmmakers is getting their start, and that our interest, curiosity and encouragement may play a part, if only in the smallest of ways, in the creation of the next “21st century classic…” Let’s go Indie, let’s go!!

Just another day in the life of an ÉCU intern in Cannes – can’t wait to see what the final days will bring!

Day 3 at the 68th Cannes Film Festival and it’s business as usual for us here at ÉCU. We’ve been interviewing many of the attendees and getting plenty of people to submit their films to ÉCU 2016.

We’ve been running into some really crazy things – from a semi-naked traffic guard dressed as a horse to a man in a tuxedo and horse mask who successfully begged for an invitation to a film. Hmmm horses seem to be a running theme…

There’s also an overwhelming amount of people here. You have your run-of-the-mill tourist taking selfies in front of the Croisette and then you have your hardcore stargazers – and I don’t mean the kind of stargazers who are interested in astronomy. They are devoting most of their day to sitting in front of the red carpet, waiting for celebrities! Most of them have chairs that they’ve locked to the barricades so no one steals their spot and even a ladder so that they can catch a better view of the celebrities. One devoted fangirl has even set up a Facebook, Instagram, Twitter and Snapchat account to document her time. Now that’s dedication! People are doing some insane things just to get close to famous people. However, I may be inclined to do the exact same thing just for the chance to be graced by the presence of Charlize Theron.

We’ve been very fortunate to meet a lot of people who are as passionate about indie films as we are. The team has even bumped into a few folks that attended the ÉCU festival last month. We can’t wait to see what else Cannes has in store for us for the rest of the week! Remember, if you think you have a great indie film, make sure you submit it!

It’s day two at Cannes for the ÉCU team! We spent the day talking to filmmakers and film lovers alike and getting a taste of the beautiful town of Cannes and, of course, the reason we’re all here: the 68th Cannes Film Festival! We have a video recap on the way highlighting the day’s festivities: the streets of Cannes, and up close and personal moments with filmmakers in the Short Film Corner of Cannes.

Check out the photo album on facebook for a taste, and stay tuned for day 3 tomorrow

We’re finally here at Cannes and spent our first day encouraging filmmakers to submit their film to ÉCU 2016. Check out the photo album and video and stay tuned for more from ÉCU’s week at Cannes!

We’ve arrived in Cannes! It’s beautiful, it’s full of inspiring filmmakers and we can’t wait to see what the rest of the week brings!

10 SIGNS YOU ARE READY FOR CANNES FILM FESTIVAL

It’s that time of the year again and filmmakers from all over the world are already daydreaming about 10 days full of glamour, socializing, and the possibility of showing their work to industry professionals. During all of the buzz around Cannes, it’s easy to forget some essential things- but don’t worry! The ÉCU team will let you know if you’re really prepared for your trip…Read more.

ÉCU – The European Independent Film Festival, three days in Paris is just not enough. We love travelling around the world making sure our Official Selection filmmakers and films are known. This can best be achieved through promoting and screening the best indie films, so ÉCU will attend the Cannes Film Festival! Read more.