https://en.opencinemafest.ru/
The last week of summer 2011 in St. Petersburg was marked by a very special event, a festival of short and animated films called “Open Cinema”, which took place on 20th-28th August. More than 100 films from 30 countries were shown during more than thirty screenings in two cinemas and two open-air opening nights on the beach of the Peter and Paul Fortress – one of the most beautiful places in St. Petersburg and in the very heart of the city

Tamara Larina, the president of the festival, pointed out that the film selection was very competitive this year, and this was obvious in the films themselves, which were all very professional, and some of them left a very strong impression.

It was really nice to see films we already knew from ÉCU (Paths of Hate, April Chill etc) on the program and to see how well received they were by the public at the Open Cinema. Stanley Pickle was shown during the first screening on the beach, and was met by a huge applause. 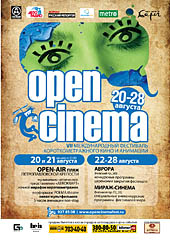 The penultimate night of the festival was devoted to a special screening of the award-winning films of the ÉCU 2011 festival as part of “Panorama 360,” a program of films from festivals around the world. 6 films (Urban Sounds, Stanley Pickle, Point Zero, A Damn Killer, Protoparticulas, Never Winter) were shown in the big hall of a very well-known movie theatre, “Avrora”, which has been open since 1913.

A special guest of the festival, actor, director and choreographer Anton Adassinsky, noted that film has become a very young and independent art – thanks to modern technology anyone can make films without the help of others, and so it becomes a truly personal message. The films from the ÉCU festival give a very good example of that.