We at ÉCU love to travel the world and discover new things, different styles, but, most importantly, to promote the creativity of our independent filmmakers through our many partnerships. We want our films to travel the world, to ensure we can spread the beauty and indie spirit of these films.

The Mt. Fuji – Atami Film & VR festival, one of our sister festivals, will be taking place from 28 June to 1 July, and we at ÉCU are so excited to be there! The Mt. Fuji – Atami Festival is an independent international film festival whose goal is to support young talented filmmakers from all over the world. This festival is quite special for us, because the festival doesn’t just showcase independent films, but rather all types of films are presented. At Mt. Fuji – Atami, you can count on originality and innovation.

We have the chance to be a part of the festival because it will feature some ÉCU films that we sent directly to the Atami Film Festival, five​ of which have been chosen for their Official Selection! 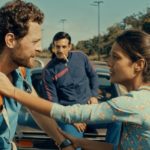 Moreover, some film that have been screen and sometimes awarded at ÉCU in the past will also be screened at the Atami Film Festival outside of their Official Selection. These films include Peaches by Hector Valdez (ÉCU 2018), Punchline by Christophe M. Saber (Best Comedy ECU 2018) and Catching Fireflies de Lee Whittaker (ÉCU 2015); It is a great pleasure to see these films traveling with us to Japan.

At ÉCU, we firmly believe that all these films, whether they are films from our own selection or films being screened for the first time at Mt. Fuji – Atami, deserve to be seen by a global audience. It is important for us to make independent film a part of the global cinema industry, and that’s why we take our films all over the world with ÉCU-on-the-Road. This festival is not only a momentous triumph for the organizers of the film festival, but for the independent filmmakers whose work is being shown. At ÉCU, we want to promote the very best of independent film and we can achieve that by going beyond borders.