The classic, stereotypically 90’s film 10 Things I Hate About You is an easygoing watch – the type of film perfect for a lazy Sunday afternoon.  Inspired by Shakespeare’s The Taming of the Shrew, the storyline begins by introducing two Seattle sisters, Bianca and Katarina Stratford (Larisa Oleynik and Julia Stiles) who seemingly have opposite personalities. 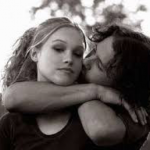 The elder sister and main protagonist, Katarina, is an independent, well-read, unyielding feminist who enjoys rock music and “sticking it to the man.” Within her high school, she has a reputation of finding it difficult to get along with others. Bianca, on the other hand, is popular and sweet; she’s your garden variety, upper middle-class, almost childish character who doesn’t seem to ever encounter much struggle. The conflict of the film is presented when their father forbids Bianca from dating until Katarina begins to date. It is obvious that the only reason he makes this outdated and slightly problematic rule is because he assumes Katarina will never decide to date high school boys. After all, she is the shrew.

Enter Heath Ledger. Well, enter Heath Ledger’s character, Patrick Verona. Patrick has a reputation for being a mysterious bad boy whom nobody really knows (or wants to know). He’s surreptitious and broody – a perfect match for fiery Katarina. Taking note of the potential for a relationship, Bianca concocts a plan to bribe Patrick to ask Katarina to the prom, so that she can attend herself. The charming scenes of their romance make the film as engaging and memorable as it’s accredited to be. Ledger’s infamous scene of singing Sinatra’s Can’t Take My Eyes Off You from the bleachers while Bianca’s at soccer practice is almost legendary.

Like any other 1990’s high school film, the teen angst seemingly grows thicker with each scene. Regardless of the vanilla flavor of the film, it really is a notable, feel-good movie. Ledger’s performance is enchanting, and the chemistry of the young lovers is inspiring to watch. The film’s spirit encourages viewers to take chances and express love for their loved ones. It embodies the theme of familial connection all whilst following the conventional tropes within high school rom-coms.