As The European Independent Film Festival (ÉCU) continues to screen and promote the very best independent filmmaking from around the world, we also continue to search for ways to create additional platforms for filmmakers to share their work and develop their creativity.

Complementing the ÉCU 2009 festival’s screenings and networking events, filmmakers were invited to participate in The Perfect Pitch, a very new and very exciting program premiering at the 2009 festival.

What is The Perfect Pitch? It is series of workshops and practice pitch sessions conducted by cinema industry professionals, aimed at assisting filmmakers in fine-tuning their presentations to producers, distributors and financiers. The program starts with a series of workshops taking place the morning of the opening day of the festival. Following the workshops is a practice pitch session, where judges evaluate each participants’ pitch and offer feedback and ideas in an open forum setting.

Following the practice pitch sessions each Perfect Pitch participant is invited to pitch their project in a professional pitch session – to a panel of producers, buyers and financiers – taking place the afternoon of the closing day of the festival. Quite possibly the opportunity of a lifetime, to say the very least… 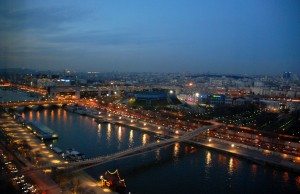 View from the Salle Belvédère at La Bibliothèque nationale de France, Site François-Mitterrand in Paris, where The Perfect Pitch was held. 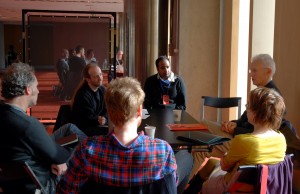 Workshops Instructors
Jeff Gross
Jeff Gross has written over 30 screenplays for feature films, shorts, documentaries and stage plays, and has collaborated on projects with renowned directors and writers, including Roman Polanski, Paul Hills and Mark Hammond. He is the author of seven novels and one play, and the director of the 52-minute documentary, “Looking for 30 People,” about the Sundance Film Festival. Most recently, he directed the 30-minute short film, “Monsieur Boulo.”

Matt Jeschelnik
After working in post-production and new media sectors for National Geographic Television, and heading up content for a leading multi-platform company, Matt Jeschelnik began Boulder Creek International in 2007. Based in London, Boulder Creek International produces and distributes a wide range of film, music, sports and factual programming.

Charles Weinstein
Charles Weinstein is a New York City film director who has worked with a number of actors, including Laura Linney (LOVE ACTUALLY), Michael Imperioli (SOPRANOS) and Calista Flockhart (ALLY McBEAL). He is currently with Film Acting Paris, which offers professional workshops training actors on everything from how to audition and rehearse to acting for the camera. At FAP, guest film directors are invited to work with the actors, rehearsing in front of the camera with scenes from contemporary scripts. 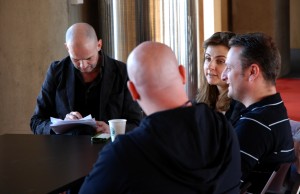 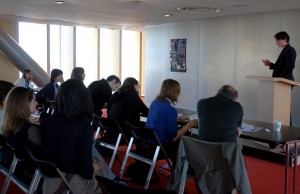 Stephane Parthenay, Production Manager, Pyramide Productions
From 1996 to 1998 Stephane Parthenay was head of booking for all Gaumont Theatres in France. Following this, from 1998 to 2000, he took on the role of General Manager for Gaumont Multimedia, handling the production of the company’s animated series, video games and web sites.

In 2000 Stephane founded Mordicus Productions, where he produced the feature film “Masai – The Rain Warriors” (2004), directed by Pascal Plisson and in co-production with Studio Canal; as well as the TV fiction “Adieu de Gaulle”, directed by Laurent Herbiet, to be broadcast in 2009.

Alexis Hofmann, Marketing, BAC Films
After working for Centre National de la Cinematographie (CNC), Alexis Hofmann joined Haut et Court, and then Memento Films, working in the programming and marketing departments for each. Now a programmer for BAC Films, Alexis is responsible for the company’s theater, radio and internet marketing.

Sylva Polakova, Public Relations, Artcam Praha
From 2004 to 2008 Sylva Polakova was involved with the Prague art-house Sv_tozor’s Audiovisual, a series of programs and screenings accompanied by discussions and artist lectures. Sylva has also spoken on the art of filmmaking at various institutions, including The Summer School in Uherské Hradi_t_, Public Library – Workshop with Women-Directors and One world – Brno 2003 – Women in Cinematography. Festival collaborations include The Gay & lesbian film festival – Mezipatra, International documentary film festival – Jihlava, International film festival of Human rights – One World. In 2007 and 2008 Sylva acted as Art Director of Femina Film, the International Festival of women’s films.

Vanja Kaludjercic, Head of Acquisitions, The Coproduction Office
Vanja Kaludjercic has been involved in a number of film projects and festivals throughout her career. From 2002 – 2007, Vanja worked on Motovun Film Festival in Croatia, and has also been involved, since 2003, in varying projects under the Slovenian Cinematheque and Arthouse Cinema Kinodvor, Ljubljana.

From 2004 – 2007 she ran and programmed the Human Rights Film Festival in Zagreb, Croatia. From 2006 – 2008 she worked at the International Documentary Festival of Zagreb, where she managed ZagrebDox Pro section – a workshop and pitching forum developed for regional professionals. And she has also run, since 2006, film programs in Zagreb’s popular cultural club Mochvara (The Swamp).

From 2006 – 2008 Vanja worked at Hulahop Film and Art production company, where she was in charge of production management for the World Festival of Animated Films – Animafest Zagreb. In 2008 she programmed New Currents Short Film section at the Sarajevo Film Festival. And in 2008, Vanja joined The Coproduction Office in Paris, where she is in charge of acquisitions.

Francesca Van Der Staay, Partner/Producer, Adesif Productions
Adesif Productions is a production and co-production office that was founded in 2001 and that has been actively producing since 2003. Past projects include “L’Illusion” and “Ballerina” by Bertrand Normand; “Loin de Sunset Boulevard”, by Igor Minaiev; and “Riparo”, by Marco Simon Puccioni. The company’s co-production partners have included INTELFILM (Italy), President Film (Russia), Les Films du Tamarin and Blue Rat Productions.

Tanja Meissner, Director of Sales and Acquisitions, Memento Films
After graduating from the Humboldt University of Berlin with studies in theater, film and cultural sciences, Tanja joined Festival International de Film de Vienne, Autriche as Press Director. From there she joined the Festival International de Film de Berlin (BERLINALE), coordinating press and industry attendance. Following BERLINALE, from 2001 through 2007, Tanja was in charge of international sales for Celluloid Dreams. In 2007 she left to join Memento Films as the Director of Sales and Acquisitions. 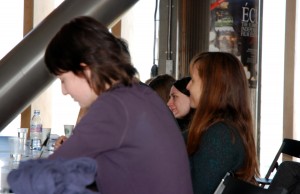